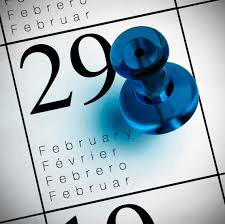 This year is the leap year, meaning an extra day added to the month of February, happens every four years. But why do we need to add an extra day for February every four years?
A full Earth orbit takes exactly 365.2422 days while our calendar (Gregorian calendar) only marks 365 days (it’s what we call a full year).

So to make it synced we need to add an extra day every four years.

But why on February and not on any other months?

The answer will need to look back to The Roman Emperors Periode.

On the Emperor Julius Caesar, February had 30 days, July had 31 days (of course it was taken over his name) and August only had 29 days.

When Caesar August became The Emperor, he added extra 2 days for August (on his ego demand) to make it same with July. And this 2 days were taken from the month of February.

Why do we call it “leap” year? That’s because on the leap year we’re literally leaping additional a day advance for the first day of each year. For example: Christmas fell on Tuesday in 2001, Wednesday in 2002, Thursday in 2003, but it was leapt away Friday and fell on Saturday instead in 2004 when it was a leap year.

< Previous Next >
+ Add your own event Eventbrite
Follow Sekolah Jelajah on WordPress.com