An exhibition “Raffles in Southeast Asia: Revisiting the Scholar and Statesman” for British Council at Asian Civilisation Museum Singapore is happening until April 2019. 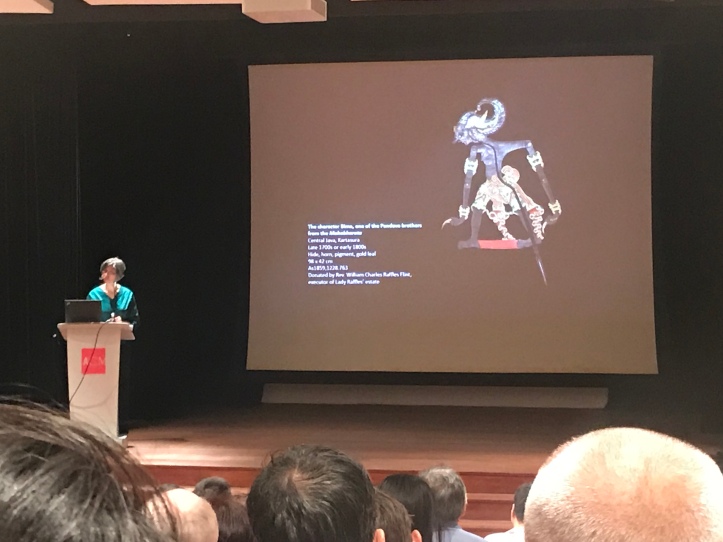 Earlier today I had a lecture “Raffles’ Collections from Java: European Evidence of Civilisation” by Alexandra Green, Henry Ginsburg Curator for Southeast Asia at the British Museum. It was well delivered and very inspiring at so many levels.

Raffles has special place in Singapore heart. Hence his name after places, roads, train station, school, institution, community and so on. Who is Raffles?

Sir Stamford Raffles was born in 6 July 1781 on the ship Ann off the coast of Port Morant, Jamaica. He was born from a regular family. Young Raffles had decent educations and went into trading just like his father. He was climbing every steps of his social status by joining as assistant secretary to The Honourable Philip Dundas Governor of Penang in 1805.

Mostly metals collection, gold, silver, bronze and other kind of metals; some are stone; but seldom are wooden materials.

From his collections, we can see that Raffles was putting many very great efforts on getting the artefaks back to Europe, as there are many of them in big size. Like the stone Mahakala piece.

Javanese pieces that he collected was various in types and models as well: statue, sculpture, masks, wayang puppets, weapons, tools, Javanese people models and painting, trading tools, etc. All are Javanese culture in which some are even no longer found in Javanese culture nowadays.

There are many reasons for Raffles to collect Javanese pieces. Here are some main reasons:

1. Raffles was not born from noble or high-class family, he climbed his way up the social ladder. One of the intelligent way of doing so was by providing informations. Europeans are craving for new land for their colony. With Raffles family background as a trader, he visited many places. Hence his best known for his founding of Singapore and the British Malaya. So when he landed on Javanese land, he found Javanese culture with its positive qualities. And to pass this informations to the Europeans, he needed proofs, so then he started his collections of Java.

2. Positive qualities of Java that he found includes many refined activities, rituals, languages, music, dances, wayang, and social classes. Kawi, ancient Javanese language was apparently known as the oldest and the most ancient language in the world, even older than Sanskirt. This refined and rich language was widely used in Central Java, and was spreading across Java Island all the way to Madura and Bali. Raffles found these qualities as valuable as gems.

3. Raffles was bonded to Javanese wayang. He found wayang not just as a story-telling art performance, but also as a historical information to connect Java with the history of the island, Nusantara and even of the world. It preserve the informations about Hinduism origins with its Wayang Purwa; about Pajajaran origins with Wayang Gedog; about Majapahit origins with Wayang Kulit.

4. Enthusiasm of british colony on Javanese culture were high. I mean to be compared with cannibalism culture in Sumatra and Borneo at that time, of course Javanese are much more refined and civil. Sumatra was hundred away left behind from Java civilisation at that time. Would you choose a place with cannibals or refined culture for your new colony?

5. Raffles had his collections of Java not by rampages, even though he was capable of doing so. Most of his collections were collected by social conversation at the court, common hall and the market place, we all know that he came from traders family. As Europeans, Raffles was immediately at the higher class amongst the Javanese. For every newly produced pieces, he would be on the first front line to have the informations. And again, these informations were needed for his social status amongst the Europeans. And these informations needed proofs. But that was not the only thing he liked about being in the front line amongst the Javanese. He found Javanese are smart, and very highly intelligent. The harmonies between the upper class, middle class and the lowest class was nothing like what he always knew back in Europe. I think it’s a quality that even hard to find nowadays in Java itself.

It was fascinating to witness Raffles’ Collection of Java, and at the same time makes me wonder: what would indonesia became if Raffles was never landed in Java? Because it was him who passed every information about the magnificent Java to Europeans, and attract many of them to come to Java and make colony. Then the acculturation happened. Do I blame Raffles for leaking all those informations? Yes and no. Yes, because then it gave Javanese culture hard time to compete with the invaders. No, because it would have been for him that we were known to the world. That it is one of the reason why Java had always been many steps ahead from other islands in Indonesia. Everything’s come with a price indeed.

< Previous Next >
+ Add your own event Eventbrite
Follow Sekolah Jelajah on WordPress.com